What Works Cities Blog Post: How Denver has saved over $15 million by investing in staff

A Q&A with Brian Elms and J.B. Wogan, Moderated by Maia Jachimowicz

August 23, 2016 – A new book from Governing magazine tells the story of the Peak Academy, a four-year-old Denver government program that equips frontline workers with problem-solving skills that they take back to a wide range of agencies, from Animal Protection to Human Services. The result? About 5,000 employees have received Peak Academy training and used their new skills to save Denver more than $15 million.

The book is Peak Performance: How Denver’s Peak Academy is Saving Money, Boosting Morale and Just Maybe Changing the World. (And How You Can, Too!).

What Works Cities has been supporting the Peak Academy in building its capacity for trainings in advanced analytics and low-cost evaluations. The City and County of Denver has also worked with WWC on expanding its open data practice and implementing the capacity for its analytics team to conduct low-cost evaluations. This month, Maia Jachimowicz, Vice President for Evidence-Based Policy Implementation for WWC partner Results for America and a former member of the Philadelphia team in Governing‘s City Accelerator, spoke with the authors of Peak Performance, Brian Elms and J.B. Wogan. Elms is the director of the Peak Academy and Analytics for the City and County of Denver. Wogan is a staff writer for Governing magazine.

You can listen to their full conversation on this podcast or read an edited excerpt below. 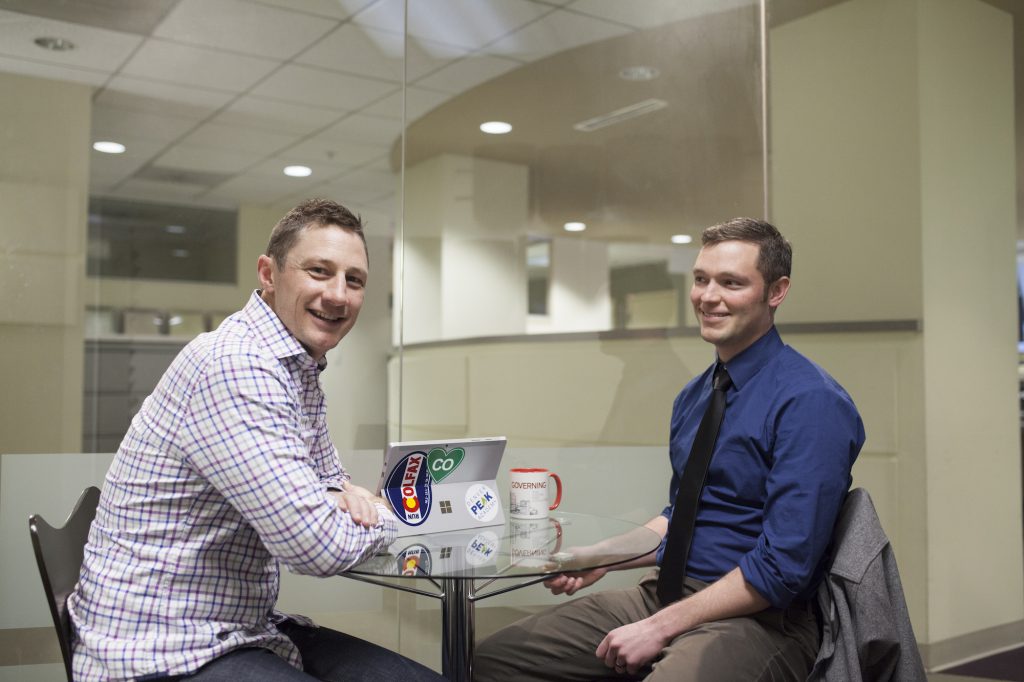 As of the writing of the book, Peak Academy has nine staff members and an annual budget of $1.2 million. What’s your advice for another government that wants to do something similar but doesn’t have the resources to dedicate that level of investment. How can they prove their value and maximize their impact?

Elms: When we started, it was really Scotty, myself, and Tom who were paid staff in the budget management office. What we tried to do was come up with a way that we could prove it out. We put in a request to the Denver Innovation Fund, a technology-focused fund that every year has a few million dollars. For the first time, we asked to pay for employees as opposed to technology. And so we asked for a half a million dollars a year for two years. We said if it didn’t work, we would fold; we would walk away from everything. The first year, we saw a $3 return for every dollar we spent. The second year, we saw a $5.30 return for every dollar we spent. We proved our ROI really quickly and, because of that, we went straight into the general fund about a year and a half in.

You do have to be mindful of how large your organization is and how many resources you need to run a program such as this. My biggest piece of advice is you have to invest in your number-one asset. Your number-one asset is people. And when you invest in them, they’ll invest in you. They’ll do things for blood, sweat, and tears that you didn’t think they would do.

Now, everyone thinks that means you have to pay them more. That’s actually not a really strong, sustainable investment. A stronger, more sustainable investment is to increase their capability. Figure out a way to teach these wonderful public servants how to enjoy their work, show them what type of value they’re providing to society, and do that in terms of building their capacity. If you do that, they will increase the capacity of the city.

In the book, starting with the mayor, your leadership team was very excited to do this work. What advice would you give someone who needs to convince their mayor or other executive leaders that this is an important component of governing well?

What you do need is someone to cover you, someone to take the flak if things go sideways. And they will go sideways. You really need one champion, and that’s typically the person above you. My boss, Brendan Hanlon, who we talk about in a chapter of the book, he’s received dozens of phone calls about me or my team, getting into an area that people didn’t want us to get into.

Brendan has acted as an umbrella. But he’s also called me and said, “Hey, get out of there. We’re not going to have a lot of success there.” We’ve got to go where we’re wanted—meaning, don’t try to force someone who doesn’t want continuous improvement to continuously improve. Go to the people who say yes. The more you go to the people who say yes, the person who said “I don’t want to continuously improve” may change their mind over time. What has happened with Peak is the demand is getting stronger internally because we went after people who said yes. In the beginning, there weren’t that many people who said yes, so we had to put all of our effort into one or two divisions. After that, it has grown.

On the face of it, this book is about how Denver teaches city government employees methods to increase their efficiency, but along the way we learn that, in fact, Peak Academy is a powerful way to invest in staff and boost overall morale. J.B., I’m curious, from your perspective, what is it about the academy that’s boosting employee morale?

Wogan: One of the things that you see over and over is people who go through the training return to their home agencies and become champions of the Peak culture and Peak mentality. They have new tools, and they’re very excited about them. You’ll go to their cubicles, and the walls are covered with production boards and process maps. Their desks are perfectly organized. They’ve really internalized the lessons of Peak, and they are excited about what it might do to make them more effective and productive. That’s what came across in my visits to Denver. 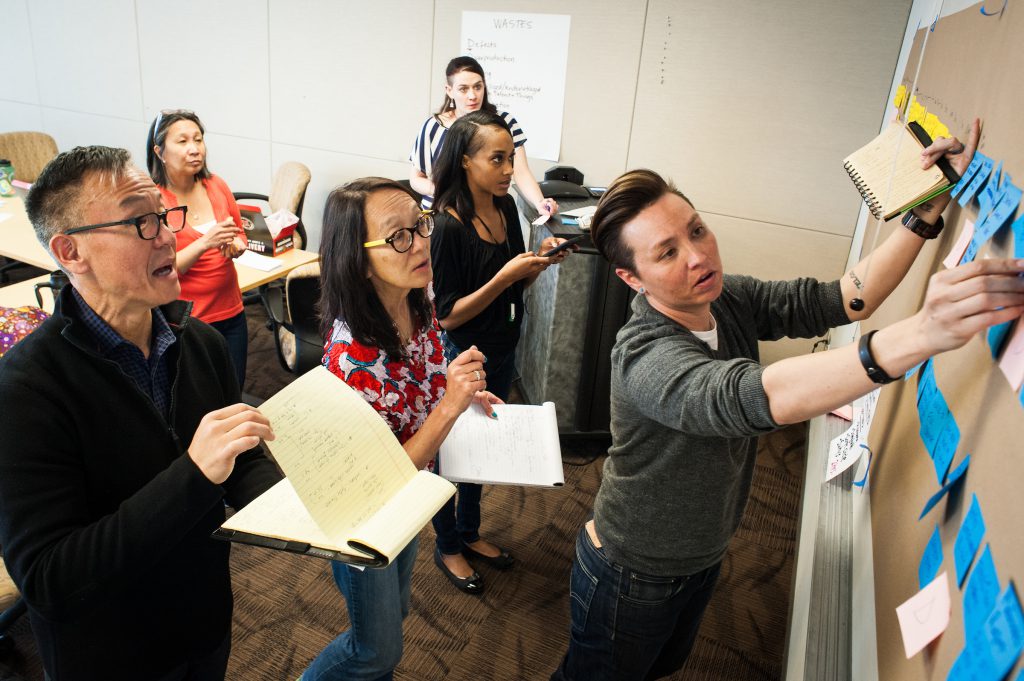 In the book, you provide a step-by-step guide of how to do process improvement work in city government, and as part of the description, you introduce the concept of a gemba walk. Why is a gemba walk such a critical step in this work?

Elms: Over time, Toyota really perfected doing this, and what it means is going to watch how the work gets done. When we started our program, we used a lot of Japanese terms, and what we found was, we were trying to teach people another language on top of a different technique. That was really hard. But we kept this word. The whole purpose is go watch how the sausage is actually made before you jump in to try and fix it.

When my team starts working in a partnership with someone—where one of my facilitators will work in a organization for six months to a year—they spend the first two months really getting to learn what’s going on, doing ride-alongs with a mower, watching how they fix a fountain, watching how they handle trash pickup in a park. If you don’t actually go out and watch someone pick up trash in a park, you can’t help them figure out ways to solve it.

Wogan: After we had gotten the green light to write the book, Governing sent me out to do the week-long “black belt” training, so I actually got to see what a gemba walk was like. One key component that I would highlight is empathy. You would go with a group of black-belts-in-training, and you would see someone’s actual process. In my case, about 10 of us sat in a room with a woman who was working on a piece of a permit review process that she and her supervisor had agreed was taking too long, and they were trying to figure out ways of speeding it up.

After we sat with her for about an hour and a half, we went back to the training room and brainstormed on what the process looked like and things that seemed like they could be eliminated or tweaked. And then we actually had to present the product of our brainstorming to her and her supervisor. You notice very quickly that the conversation changes, and your mentality changes, when you actually have to present your assessment to the person who owns that process. I thought it was a good lesson in trying to communicate constructive solutions.

Elms: Yeah. It’s one thing to be an armchair quarterback and the person’s not in the room and you come up with all of the reasons they can’t figure it out. It’s a totally different feeling when you have to talk to the person. 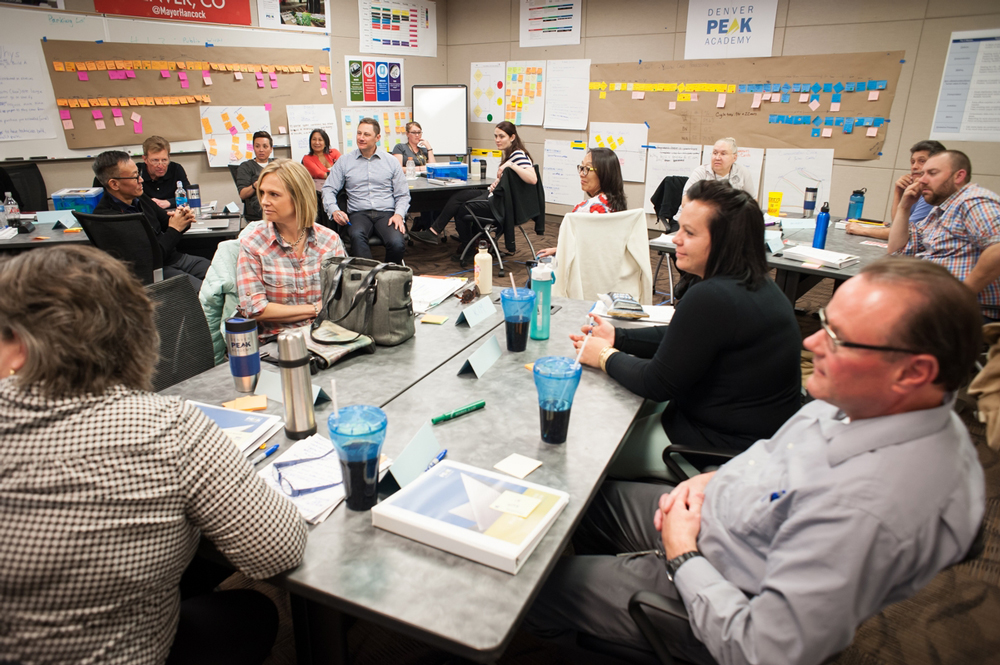 Can you talk about how the Peak Academy is uniquely designed to be sustainable beyond Mayor Hancock’s term?

Elms: What we’ve decided to do is worry less about the brand and worry more about the capability-building. We’ve trained 5,000 city employees on different problem-solving techniques, process-improvement techniques, brainstorming techniques, behavioral indicators. We are jumping into forays of open data and data analysis. Whether we go away or not, we’ve increased the ability of thousands and thousands of employees who work here. There’s that old adage: If you train people, there’s the potential that they will leave. But if you don’t train them and they stay, how is your organization going to thrive? It won’t thrive if you don’t train them.

I don’t really care if they call it Peak or performance management or “the Hancock.” What I care about is that these individuals chose to work here and that we make them the best technicians we have, the best firemen we have, the best policewomen we have. If we can do that, then I don’t know if Peak needs to be sustained. I think you develop a lasting legacy of investment and support, and that’s stronger than any brand.

Peak Performance: How Denver’s Peak Academy is Saving Money, Boosting Morale and Just Maybe Changing the World. (And How You Can, Too!) is available on Governing.com and through Amazon.