When the safety of approximately 12,000 residential rental properties instantly became the responsibility of Saint Paul’s Department of Safety and Inspections, a data-driven approach helped the Department rise to the challenge. 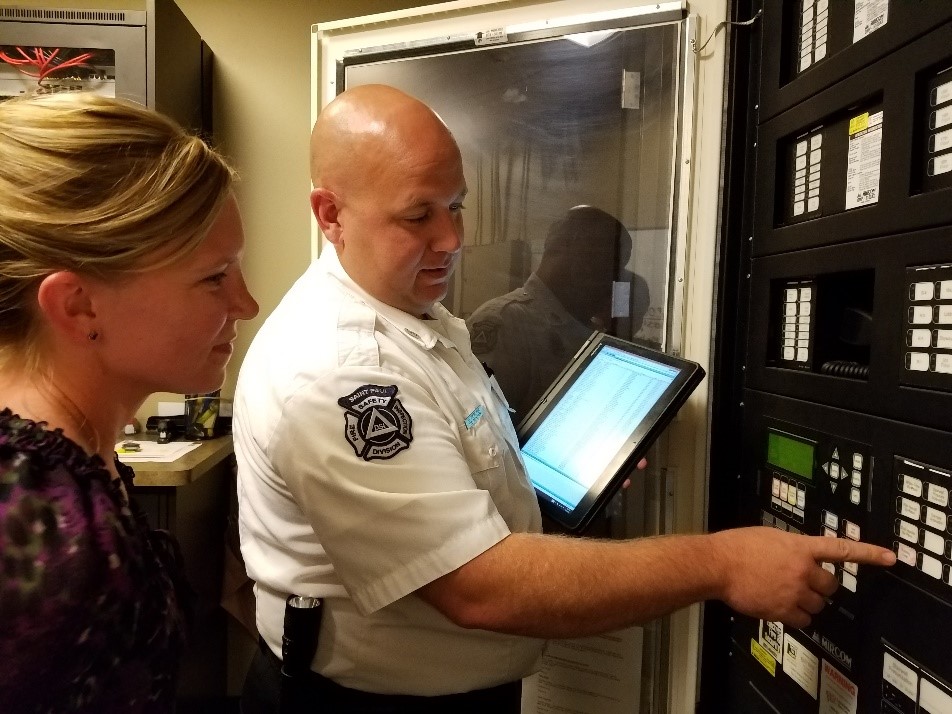 April 25, 2017 – With the stroke of a pen in 2007, the safety of approximately 12,000 residential rental properties instantly became the responsibility of Saint Paul’s Department of Safety and Inspections (DSI). The City had determined that owners of one- and two-unit rental properties would now be required to obtain a Certificate of Occupancy and meet the city’s property maintenance codes, resulting in an approximately 200% workload increase for DSI’s Fire Safety division.

The DSI worked diligently to inspect these properties as required by local ordinance; however, it became clear in 2015 that the Fire Safety division was unable to keep up with the need for inspections. This troubling reality was quickly growing into a significant source of concern for program staff, who take seriously the responsibility of protecting residents’ safety.

With support from the Mayor’s Office and City Council, DSI developed a multi-faceted approach in 2014-15 to tackle this challenge. We began by hiring three additional inspectors—a 14% increase in staff—but we recognized that this increase alone would not be sufficient to fully address the large backlog of inspections. So we considered other strategic practices we could implement to increase what our staff could accomplish while still ensuring the quality of their work. We decided to further incentivize owners to maintain their properties by allowing those who received favorable scores on their last inspection to wait six years, instead of four, for their next routine inspection. We incorporated “Live in the Field,” a program that allowed staff to bring mobile work stations to inspections, significantly increasing inspector efficiency. And we committed to regularly measuring and discussing our results to determine how we could continuously improve outcomes.

Shortly after initiating these steps, the Saint Paul Innovation Team and the Mayor’s Office applied to What Works Cities (WWC), and Saint Paul was accepted to participate in the national initiative. As a result of this achievement, Saint Paul staff were able to leverage expertise from the WWC network in addition to that of our Innovation Team to help address long-standing challenges like those we were experiencing in DSI.

Shortly thereafter, the Innovation Team consulted with us to develop a clear strategic goal tree (see Figure 1) that helped us to build awareness of what we were trying to accomplish, to identify and align those goals with high-impact actions, and to communicate those efforts across the department.

With the resulting clarification of goals and sub-goals, we were then able to define meaningful performance measures and related performance targets to inform strong data collection and analysis. This, in turn, enabled us to begin asking even more meaningful questions about progress and then reallocate resources in ways that would most dramatically advance progress towards our performance measurement targets. For example, early in the process, staff realized that we were not driving results as fast as desired to reduce the backlog of inspections in certain types of high-risk buildings.  As a direct result of measuring our progress towards our goal and analyzing what was preventing us from achieving it sooner, staff were reassigned to those properties. In addition, a monthly data-based dashboard was created to demonstrate ongoing results and is now shared monthly and discussed at regular staff meetings (see Figure 2). Not only has this helped staff understand our goals and the current direction for the division, it also demonstrates that we are winning our battle! 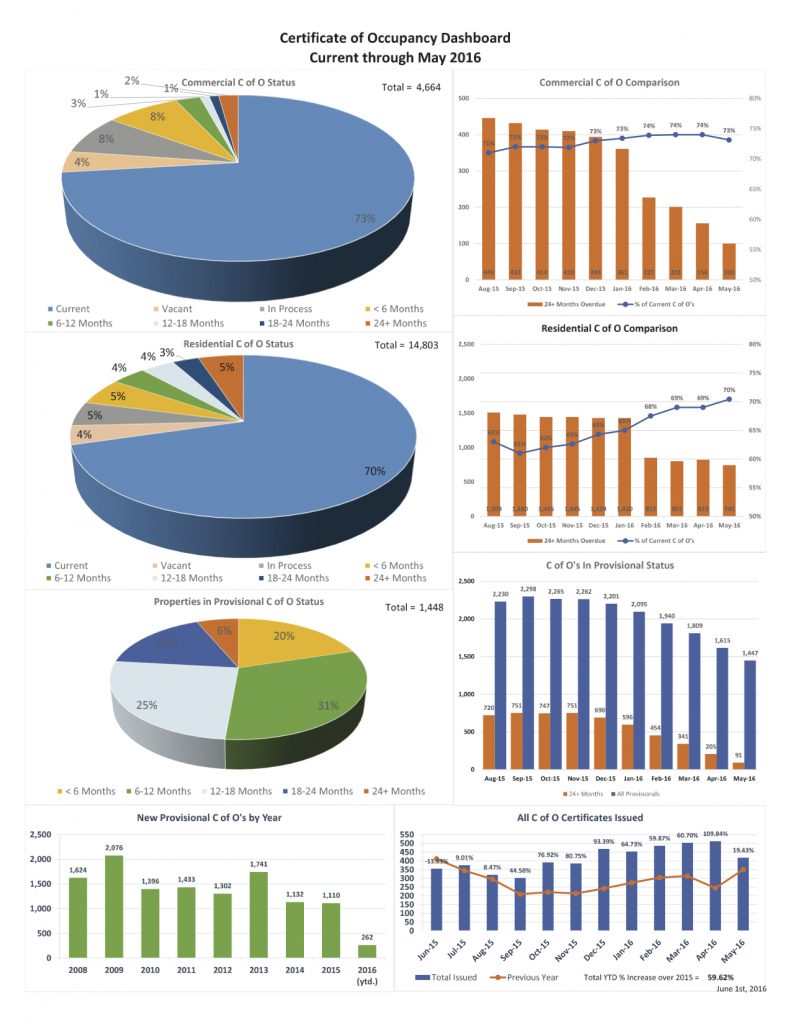 In less than a year after applying this data-based approach to monitoring and managing performance of these inspections, overdue properties are on the decline (see Figure 3), and overall productivity has increased by over 50% (see Figure 4). 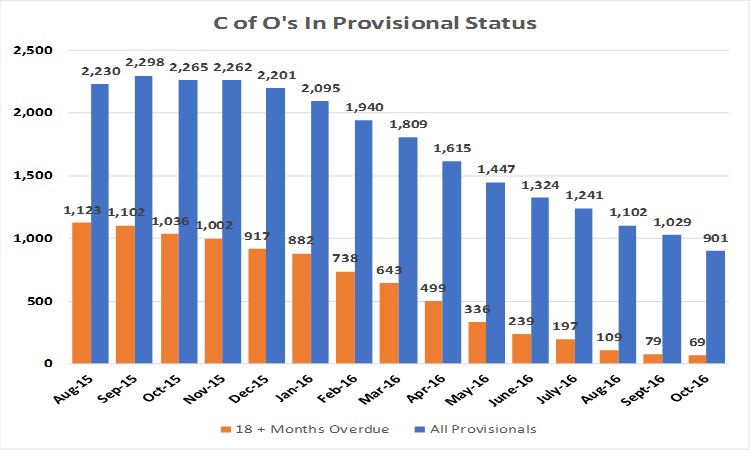 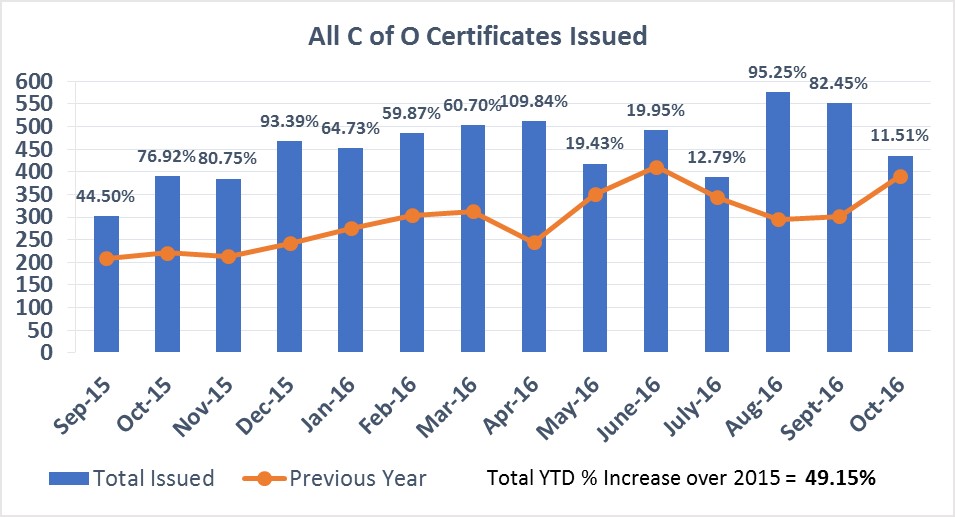 Equally as important as improving our performance, the internal DSI culture is changing as a result of this work. Staff are now voluntarily identifying and questioning DSI performance data and identifying strategies to further move the division closer to our target performance levels. For example, in 2015, while we were regularly discussing recent performance, staff asked why the number of overdue properties was higher than those on their automated task lists. This resulted in a closer look at the data, and we determined that a large portion of overdue properties were simply mislabeled as overdue (note the substantial decrease in 2015).

These steps to define and use clear goals and metrics—and to analyze our progress—have created a clear roadmap for this division within DSI, and now we are excited about what the future holds. Instead of just focusing on project-based work, reflecting on and improving our performance by using data is becoming how we do what we do and will keep us focused on how to best serve our residents. This method and framework to accurately demonstrate our progress both to ourselves and our residents better positions the department and the city for a successful future.

Travis Bistodeau, Deputy Director for the City of Saint Paul’s Department of Safety and Inspections, lives in the wild world of code enforcement in Minnesota’s lively capital city. With over 15 years of regulatory experience and a Master’s degree in Public Administration, Travis is well prepared for the challenges and most of the surprises that make up his day.